Artist Riem Mony Selong (AKA Monisilong Riem, Selong Vat) works with waste and garbage. He is a trash art artist of Cambodia. He plays with waste, lives with waste, and struggles to etch out his living with waste – but don’t think for one minute he is wasting his time. It is wiser to wish there were more artists exploring waste in the world – and wiser still to try and understand what his presence means to Cambodia and the world at large. I met Selong and meandered around his home studio in Banlep village, Sangkat Slor Kram, Siem Reap…and I haven’t stopped thinking about him since. He is a gracious gentleman – patient, grinning with pride for his young son’s artistic endeavors, pleased to be able to introduce me to his relatives and his little shop in the city’s Made in Cambodia Market, and relaxed in our discourse – aided by Sun Sophos, the Tuk Tuk driver renowned for his delightful trademarked siren call when he pulls into his destination. (Come to Siem Reap and you will hear him around every street corner.)

Trash, garbage, rubbish, junk, and waste are recurring inspirations in contemporary art. Some artists see a signal of imminent ecological catastrophe. They recognize that rubbish is a good metaphor for a dysfunctional civilization and a powerful reminder of what consumer capitalism does to the earth and its inhabitants. Tierry Bardini, who is renowned for his theoretical studies on junk, underlines junk’s potential of being recycled, used for new purposes, and thus brought back into life once again. Others, like the Russian artist Ilya Kabakov, felt that ‘rubbish is as eternal as life itself”.

Some of these ‘rubbish’ artists are considered what the art world calls Folk Artist or Outsider Artist – untrained artists working on the margins of society who altered our notions of creativity and explored the value of biography as vehicles for appreciating a work of art. It’s getting harder to identify Outsider Art with the world growing more connected, if only by technology, YouTube and social media. Who is an Outsider Artist nowadays?

The preoccupation with waste is not new in literature or the arts and scholars have long strived to theorize waste and the relationship between human history, culture, art and philosophy. Until the recent connection of emerging schools of thought – environmental justice and new materialism – those people who live and work in, around, or near waste were basically ignored. 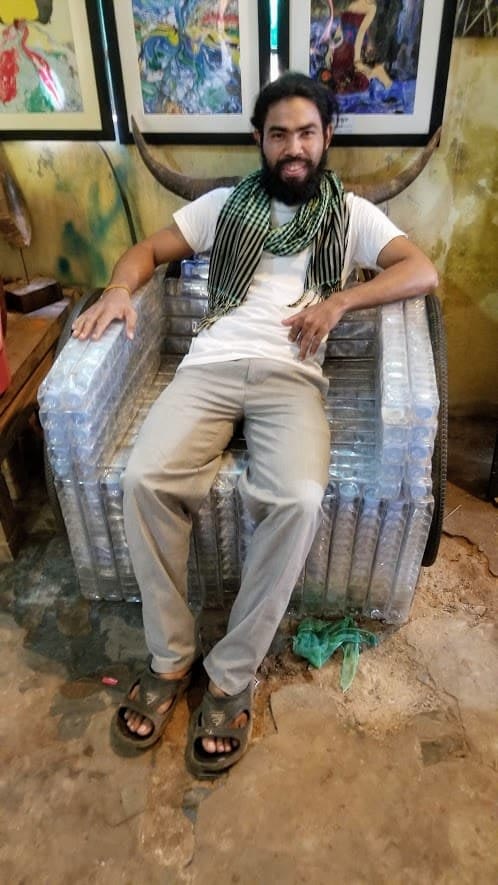 In ‘The Death of Nature and the Apotheosis of Trash; or, Rubbish Ecology’, Patricia Yaeger argues that the former nature/culture binary has been displaced in postmodern trash art by a prevailing concern with trash (Yaeger, 2008). Yaeger does not claim that the preoccupation with waste is new. As she points out, one need only look to the work of Charles Dickens and T.S. Eliot to see that this is not the case. Her argument, though, is that ‘postmodern detritus has unexpectedly taken on the sublimity that was once associated with nature’ (Yaeger, 2008, p. 327). Working with a vast array of examples by photographers, sculptors, architects, writers and film directors – Jeff Wall, Mark Doty, Vik Muniz, Mark Dion, Robert Smithson, Don DeLillo, Karen Tei Yamashita, Ridley Scott and Steven Spielberg among many others – Yaeger suggests that, since World War II, detritus has replaced nature as a ‘means of exploring change, mutability, depth, and the thrill of metaphysical quest’ (Yaeger, 2008, p. 332). She offers six main reasons for this aesthetic turn towards trash: the inescapable intermingling of trash and nature at a point in our history in which no stone has been left unturned; the post-war shift from a culture of maintenance to one of discards and (planned) obsolescence; the fact that detritus is the ‘opposite’ of the commodified object, and thus our cultural obsession with the commodity is mirrored in a preoccupation with its remains; the attractiveness of trash as a rebellion against Enlightenment dialectics (nature/culture, chaos/order, irrationality/reason); the mutability of objects from commodity to trash and back to commodity (as demonstrated by the figure of the junk man); and finally, the epistemological shift from one binary (nature/culture) to another (culture/trash), and our consequent embrace of the toxic.

What does all this mean for Cambodian contemporary art and the artist Selong Vat?

Cambodia has a severe waste and garbage problem. According to a recent Ministry of Environment report, about 1.5 million tons of waste or 41% of the total annual waste collected annually were sent to dumpsites. About 400,000 tons or about 11%, were recycled. The remaining 48% was burned or thrown into bodies of water.  The garbage produced in Cambodia has surged at a rate of about 10% each year, all caused by population growth, changes in commercial packaging, the lack of education on how to sort waste, the government’s unwillingness to find solutions, and the public’s inability to collectively address bad habits.

The growing problem is shared with struggling economies around the world and Rwanda is one of the few examples of success. Although Rwanda is an emerging police state recovering from its own genocide, it has conquered waste management and is the cleanest nation on the continent.

Selong Vat is not a stranger to a precarious existence – few Khmer people are. Like a majority of his peers, he has known poverty, lost his fingers to an accident, and received only rare opportunities for education or sustainable employment. He also knows that garbage and waste can help us experience commonality with others. He found the strength to face it in its larger form and confronted it with creativity.

He uses his self-taught talents to face waste with all its stinking, dirty universality.  Using plastic bottles, debris, natural fibers, local trees, fish scales, eggshells, a little paint – and anything else that appears as he rummages through garbage – Selong plays and produces whimsical pieces in a wide range of mediums. From bumblebees to giant Khmer musical instruments, Selong grabs garbage by its neck and typically turns it into smiles.

Nowhere is this more clear that in the Tuk Tuk Channel’s YouTube video entitled The Odyssey of the Plastic Chapei Dang Veng by Riem Monisilong.  This adventure, exquisitely filmed by Patrick Karsale, will have you grinning from ear to ear.

Selong Vat has never had the privilege of schooling, either as a child or an adult. Raw Vision Magazine describes Outsider Art with the words untrained, unschooled, and uninfluenced. Personally, I perceive him as an authentic artist emerging from an environment that is manifestly more inside the struggle for self-expression, survival, and the deep woes of the planet’s environmental destruction. He lives and breathes it every day. Selong Vat exemplifies the human spirit and he expresses love, emotion, joy, and the universal attributes of being alive.  While he has received good press in Cambodia, he remains out of eyesight from other artists exploring trash art and those chronicling it. Unlike many established artists dealing with refuse and exploring how materials can be reclaimed and redeemed, Selong remains close to the refuse itself. He does not need to assume the role of someone carrying out the labor. He does not need to appropriate any precarious position for an audience that tends to live far from landfills, garbage sites and litter seen everywhere. There is no dualism in his work.  Indeed, Selong understands ‘waste’ in all of its manifestations. Wasted food, wasted materials, and above all – ‘wasted lives’. And he still continues to generously smile and embrace the world around him.

I've never been good at elevator speeches when someone asks you 'what do you do'? I have graduate degrees and all kinds of other credentials, but they mean little to me. I've been a librarian, pineapple picker, one-room schoolhouse teacher, serial entrepreneur, restaurant owner, theater director, radio and TV scriptwriter, and dozens of other things. I lived with the homeless, traveled solo like a Peace Pilgrim, and spent most of my years as an actress. I direct a non-profit charity supporting the arts and started Magical Cambodia to express my awe of Khmer culture. www.livingartscorp.org.