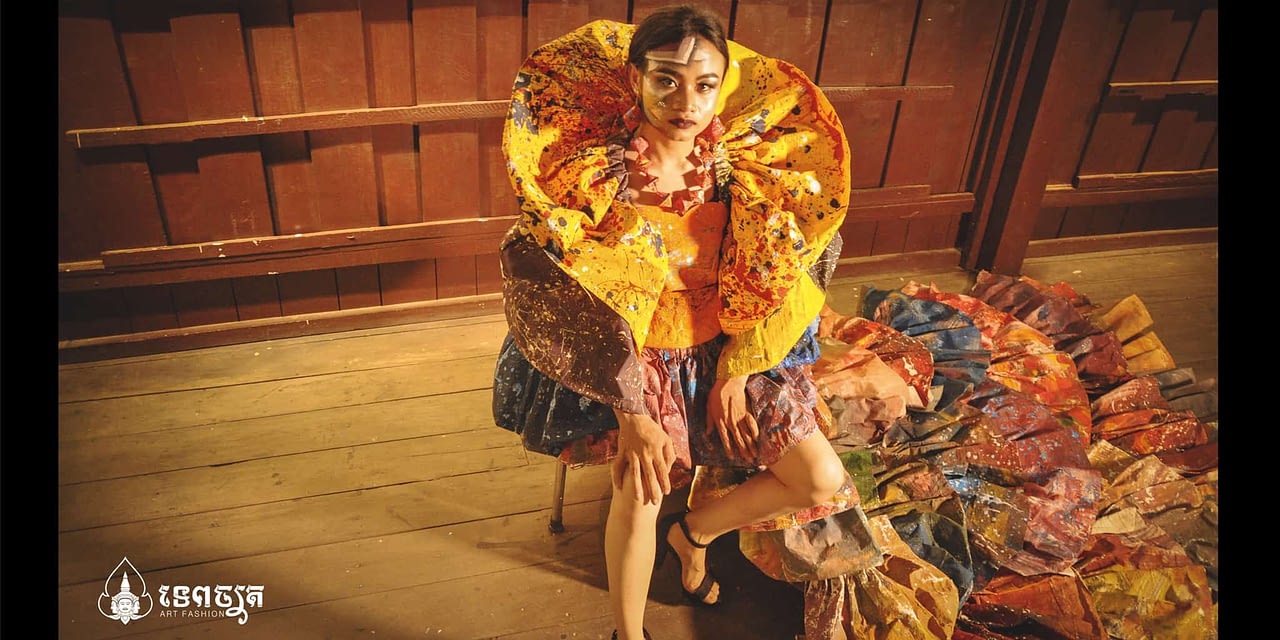 The Imaginative Art Fashion of Koemyean and his troupe Tepsyort

Koemyean, a teacher of graphic design in Phare’s  Visual and Applied Arts School (VAAS) in Battambang, modestly declares his fashion ventures made from recycled plastic and rice bags are not professional but made from his heart to support the development of art. He may be wrong – his art is a daring fashion and it certainly appears professional. He calls his work Tepsyort Art Fashion.

Koemyean is a young man of 27 and his students and models are even younger.  Like so many of Cambodia’s artists, he hails from Battambang and was once a student grasping for art education.  Phare gave him the education and now he returns it to other young Khmers interested in design at Phare Ponleu Selpak.

No, it is not for sale and you will not see it in store windows. Yet if you come to Cambodia, chances are you will experience it on an event stage or in the streets of Battambang. His troupe is a delight to behold and you will never again perceive fashion as the bastion of Europe or the United States. Instead, Koemyean boldly claims a contemporary Khmer style that deserves attention.

My first encounter with Koemyean’s creations was during the 2019 S’Art Urban Art Festival in Battambang.  The energetic and successful five day festival of workshops, exhibitions, mural painting, live music, and the Giant Puppet Parade ended at Dragon Peace Garden, where the crowd reveled in Koemyean’s fashion show focusing on recycled materials transformed into colorful and striking designs.

Koemyean uses inexpensive materials to create his visions. Cardboard, plastic, used rice bags and various other sundry items are transformed from garbage bins and side streets where he scavenges for materials (the scavenging has slowed down and he now buys in bulk). He combines traditional Khmer patterns and symbolism into pieces exploding with color and drama. He is a theatrical designer in a nation without stage theatre so his stage is the community gathering spaces and the lively streets of his hometown.

His apsara tiaras and crowns made from hard glue, paint and cardboard become more and more elaborate with each public show, yet seldom do they waiver on the heads of the attractive Tepsyort models.  The outfits may seem outlandish to some until they are compared with what many of the high-end fashion designers such as Christian Lacroix, Gosia Baczyńska, Ekaterina Tkachenko, Moncler House, Rei Kawakubo, Gareth Pugh, and many others are creating.

Instead, Koemyean’s work reflects part of a larger group of fashion designers using recycled materials and plastic for commercial purposes. As society wakes up to the impact of its habits, recycled plastic has become the next great materials trend in fashion. Plastic is today a wearable badge reading “hip to the times.”

A quick Google image search of fashion made from recycled materials reveals designs as daring as Koemyean’s work.

For now, Koemyean’s childhood dreams of fashion design remain in Cambodia as he emphasizes teaching his students art and design.  He is not interested in making casual fashion that one can wear on the streets. Instead he typically works alone in his spare time producing new outfits, each taking 12 hours to create. He works intuitively and frequently re-makes designs used from previous shows. His shows recently appeared at the Chumnor Art Fair and the United Nation Day in Battambang University.

As an audience member, it is joyful to witness how Koemyean contextualizes the ideas he explores and outright enthralling to watch his models perform with flair, grace, and contagious enthusiasm.

This Body Mystery – By Chath pierSath