148913: Paths of the Lotus Ink by Morrison Polkinghorne at Bangkok, Thailand’s Serindia Gallery

I kept bumping into Morrison Polkinghorne on my first visit to Battambang during the 2019 S’Art Urban Art Festival.  S’Art refers to the beauty of Urban Art and the festival is a community-driven biennial event, which promotes Battambang as an important city for Khmer culture and art. Having just arrived to live in Siem Reap, Cambodia I was already astonished by how accessible everyone was and how the alchemy of connections seemed to simply manifest. I think it only took two ‘bumps’ to know that I was going to be fascinated by this gentleman.

At first glance, Morrison is an energetic and animated man who seems to know everyone in the city and is greeted by all as he walks down the little streets towards his establishment, Bric-a-Brac – Awarded Best Boutique Hotel in Cambodia by Sovrin Magazine 2019, 2018. He and his partner, Robert Carmack, known as the Globetrotting Gourmet and author of award-winning cooking books, left Australia and moved to Battambang to create a charming emporium, after-hours bar and intriguing little hotel in the downtown gallery area.

Yet that is just a slice of Morrison. At his core, he breathes the life of an artist and he is a master of many arts. He owns a beautiful loom and weaves.  He makes tassels, trims, bullion fringing and ornamental ropes using purely handmade techniques – a practice known as passementerie – for clients requiring historical replication or aesthetics. (See Morrison Polkinghorne’s Tassels and Trims.) He also creates subtle and sophisticated visual art.

Perhaps Morrison Polkinghorne is the master gestalt painter of Cambodia, although I have never heard him use that word. Gestalt theory, a theory about perception, holds that the whole is more than the sum of its parts. It describes our ability to recognize patterns and make associations; group objects that are close together into a larger unit; relate and group objects of similar shape.  The study of gestalt (German: meaning shape, figure, form) originated in Germany in the 1920s. It is a branch of psychology that is interested in higher-order cognitive processes relative to behaviorism.  The aspects of gestalt theory that interests designers are related to the theory’s postulations of visual perception—principally the relationship between the parts and the whole of visual experience.

Each of Polkinghorne’s paintings has hundreds if not thousands of parts. One tiny lotus stem stamping after another. Together, these tiny parts create a recognizable whole.

His paintings are visual meditative mappings of Cambodia through his instinctive practice of counting, using sacred ink, and lotus stems to print large patterns that become images of exacting beauty. Most of his paintings reflect the theme of Cambodia’s waterways, rivers, and deltas – the lifeblood of a nation that survives on the monsoon to enrich its soil and fisheries before the rain departs and leaves the earth scorched.

“My vision began with a desire to create a single piece of art of a square or a rectangle by using something circular or round.  As I sat in my atelier, lulled by Khmer crooner Sinn Sisamouth in the background, I grabbed an inkpad as I spotted a lotus flower.  I broke off the petals and inked the stalk.  What a wonderful impression it made! A circle with seven holes.  I inked it once again, and stamped the paper again. One mark after another, the impressions filled my first square”, writes Polkinghorne in his handmade book Sacred Ink Lotus Art.

Most artists struggle with discussing their work but Morrison delights in sharing his process in workshops and exhibitions. No one needs to ponder how he creates his pieces, what motivates him to do so, or what meaning they hold for him because this artist is articulate in his wordsmithing, videos, handmade limited edition books, and website. It is only proper that I let his words speak for themselves.

Morrison has an upcoming 2020 exhibition at Sofitel Phokeethra, Phnom Penh 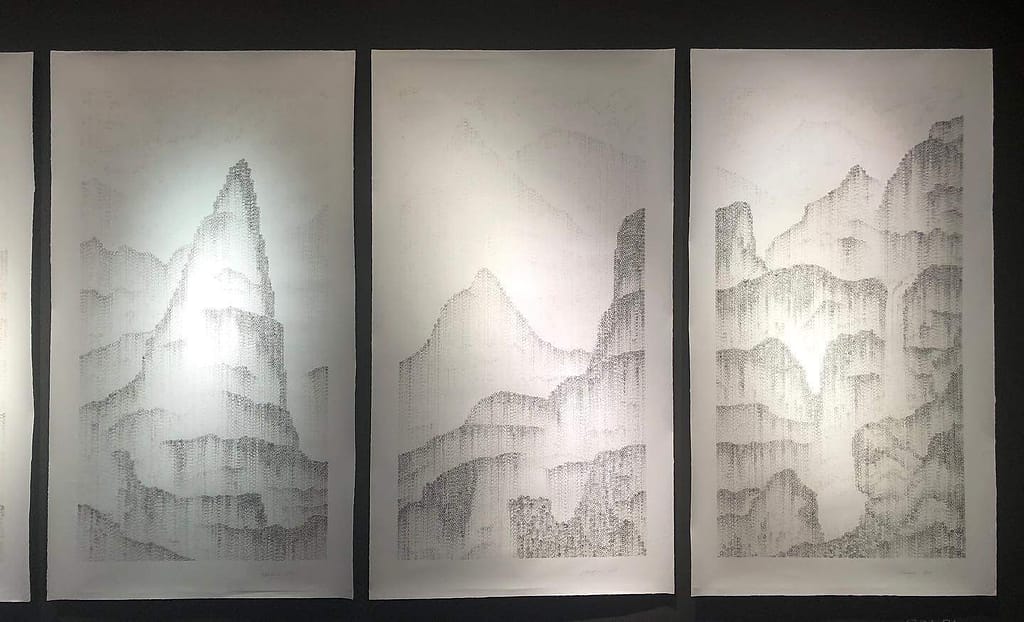 Lotus stems are my paintbrush, while its flowers create my tones. I envision my pieces as both ecological and holistic, with Cambodian nature as the source. My pictures reflect the waterways and deltas of Cambodia, the kingdom’s true lifeblood.

The theme of lotus art is the perfect imagery for Cambodia, as the flower symbolizes the Lord Buddha’s spiritual awakening, emerging from the muddy dark depths into light and becoming a flash of beauty.

Sacred Ink Lotus Art consists of vertical and horizontal rows of varying depths of darkness. Each painted line complements one after another, rising from the base to the top. My pieces emerge like a lotus flower grows. Using the stalk as a paintbrush, my initial embossments are darkest, and what eventually remains are but faint impressions with ever-decreasing ink fading to oblivion. Each stamp is unique, as the paper varyingly absorbs the lotus markings.

My unique ink is just as remarkable and unexpected as the final art. Like a rare distillate, or Sacred Ink Lotus Art so to speak. Each year, I collect cartloads of lotus recycled after the Lord Buddha’s birthday. Typically, one cart produces as little as a few cups of ink.  First, I char the petals, and then during the monsoon season I set out trays to collect rainwater.  I then brew the charred lotus petals distilled with the Battambang rainwater, a painstaking process that takes a further year. In this way I offer an original environmental approach to art, from pond to studio to display.

Equally noteworthy is how I sign my works with the number of lotus impressions embossed on each piece.  As a weaver I am used to counting:  from the number of shuttles going from side to side on a loom, to tallying warps and wefts (the length and width of threads) and calculating actual thread sums as well. So it’s natural and automatic for me to count the number of lotus impressions I apply onto each of my works. I then entitle each of my works from the total of lotus marks stamped on each paper, finally signing this number along with my artist’s autograph.

A piece of white paper has nothing on it. It is the same as the emptiness of the space or the vacuum within an atom. But the vacuum is not nothing as it has the power of creation.

I instill my works with love, will and emotion. The space between the electrons and the nucleus of an atom also has the same power of love, will and emotion. One electron, two electrons three and more has the power of creation. Looking at a blank piece of paper I first see an idea for the art in front of myself. And with the first lotus mark the power has started at one. With two the direction starts to form from the vacuum of blankness. The unseen has immense and unending power. Let the art work its own creation, as I am counting the unseen into being.

I find the last line of inking is the most fulfilling time in the creation of my art. It is the completion of the work that I conceptualized so early on. Now for the first time the power has come into being and the vibration of the work has fully appeared. The emotions start to form. The finished work has vibrated into existence.

There’s joy in repeating painstaking patterns over and over again in my inked lotus works. With myriad individual markings, I create existence from nothingness. As for my love of numbers, these reinforce my craft.

The artist at his exhibition at Serendia Gallery in Bangkok and in his home studio in Battambang.