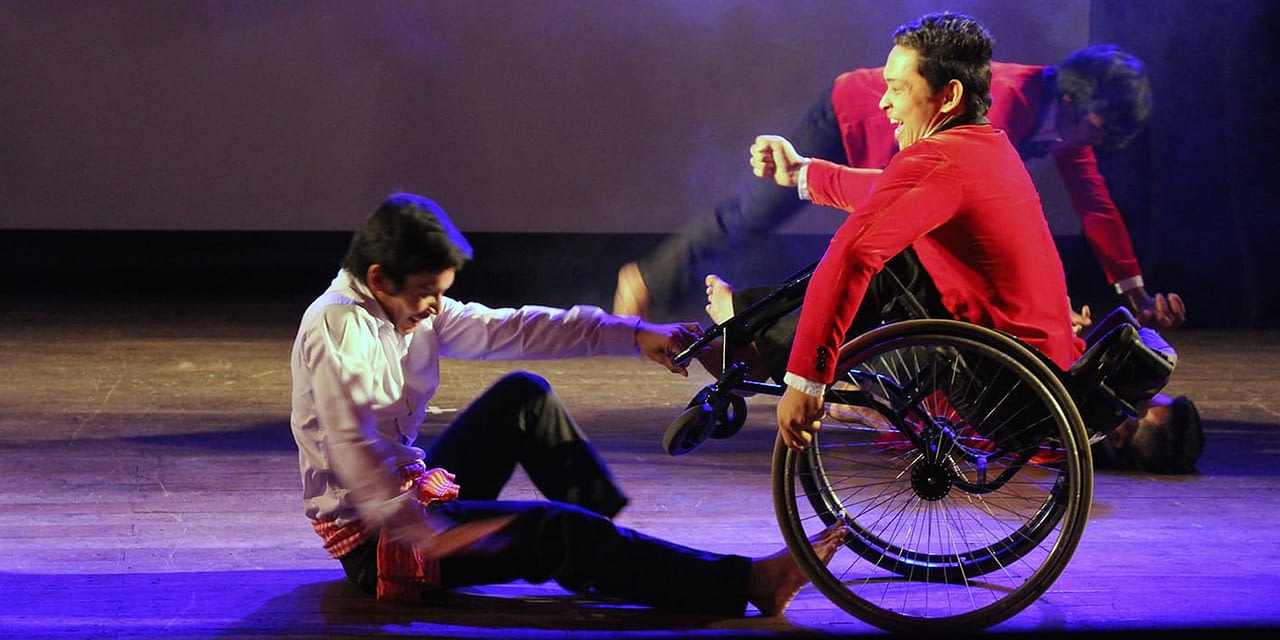 Cambodian art (Epic Arts Cafe): Come Back Brighter celebrates Cambodia’s arts scene and narrates the country’s journey from the swinging sixties to the present day through the use of dance and archive footage.  Phnom Penh Post heralded it as “Nothing short of an astonishing and moving experience for the viewer.”

Art is perhaps the most compelling and participative forms of human behavior. It creates empathy, generates personal and collective reflection, fosters dialogue, discovers new ideas and finds solutions. All of this is evident in a little southern Cambodian riverside town called Kampot and an active NGO aptly named Epic Arts. It is epic and it is art – and it is certainly changing lives.  The hallmark of this social enterprise is its inclusivity and its mission to include the severely marginalized members of the community.

Cambodia is not alone in its distressing treatment of individuals with disabilities but it truly lacks the willingness to address the nation’s problem.  Severe discrimination and poverty affect the majority of those born disabled or those who became so due to land mine events, construction accidents, polio, meningitis or the atrocities of the war and the Khmer Rouge which produced severe mental and physical illness.  There are no safety nets, few if any public accommodations or rehabilitation services exist, and there is little education or protection.   All too frequently, there is no hope. The treatment of individuals with disabilities is typically inhumane and dreadful.

I was introduced to Epic Arts through the stories of several of its graduates who are now established working artists in Open Studio Cambodia. Much of the credit for their self-confidence and willingness to explore their talents is due to Epic Arts, who offered them dignity and the tools to build new capabilities.  These artists grin when they share their Epic Art stories and how their experience turned their lives around.

Epic Arts is an international, inclusive arts organization based in Cambodia and registered as a charity in the UK. They began their work in Cambodia in 2006 and opened the charming Epic Arts Café in Kampot to employ people with disabilities and show Cambodia that people with disabilities can work. The Cafe is an inclusive working environment, where baristas and chefs with and without disabilities work together, some staff are deaf or hearing impaired, some staff has physical disabilities or low vision. Orders are made with visual menus for the hearing customers to communicate with deaf staff.

Within a few years, they built the first fully accessible arts center of its kind in Southeast Asia. Offering visual and performance classes, they opened their doors to all and boldly reached out to the disabled community.  They state it clearly:  Epic Arts believes in a world where every person counts and where people with disabilities are valued, accepted and respected.  We promote the inclusion of people of all abilities and disabilities through the arts. We use the arts as a form of expression and empowerment to bring people with and without disabilities together.

Operating on multiple levels, Epic Arts provides a Special Education Project serving children with learning disabilities; a two-year arts-focused course; a community outreach team that delivers art lessons in local schools; and Epic Encounters, an ensemble group of talented performers from Cambodia, some of whom have disabilities. They build and expand their community by showcasing emerging national talent, holding art tours, community workshops, and dance, music and theatrical performances throughout the year.

There is no curriculum for the arts in Cambodia’s state schools. By its admission, the National Strategic Development Plan 2014-2018 admits the severe inadequacies: “The education sector lags and concerted effort is required for improvement. Principal problems include the low quality of learning, limited learning infrastructure, insufficient well-qualified teachers, not fully implemented quality assurance systems, and few quality institutions of higher education”.  While teacher salaries have jumped from an average of $80 per month in 2014 to $230 per month in 2017, Cambodia remains far behind the rest of the world in its willingness to address education.

The nation does not allow people with disabilities to become teachers and Epic Arts serves as an advocacy platform to change attitudes through art education.  Their Arts Team provides weekly art and dance lessons at schools in Kampot and by setting an example of a curriculum in creative arts, they hope to influence the future of Cambodian school system.

Guest choreographers are routine instructors at Epic Arts and international collaborations are now part of the realized dream.  We are Epic acts as a partner organization based in the UK and as a conduit for future Epic Arts work outside of Cambodia. We are Epic has produced two powerful artistic works that are available for international booking. 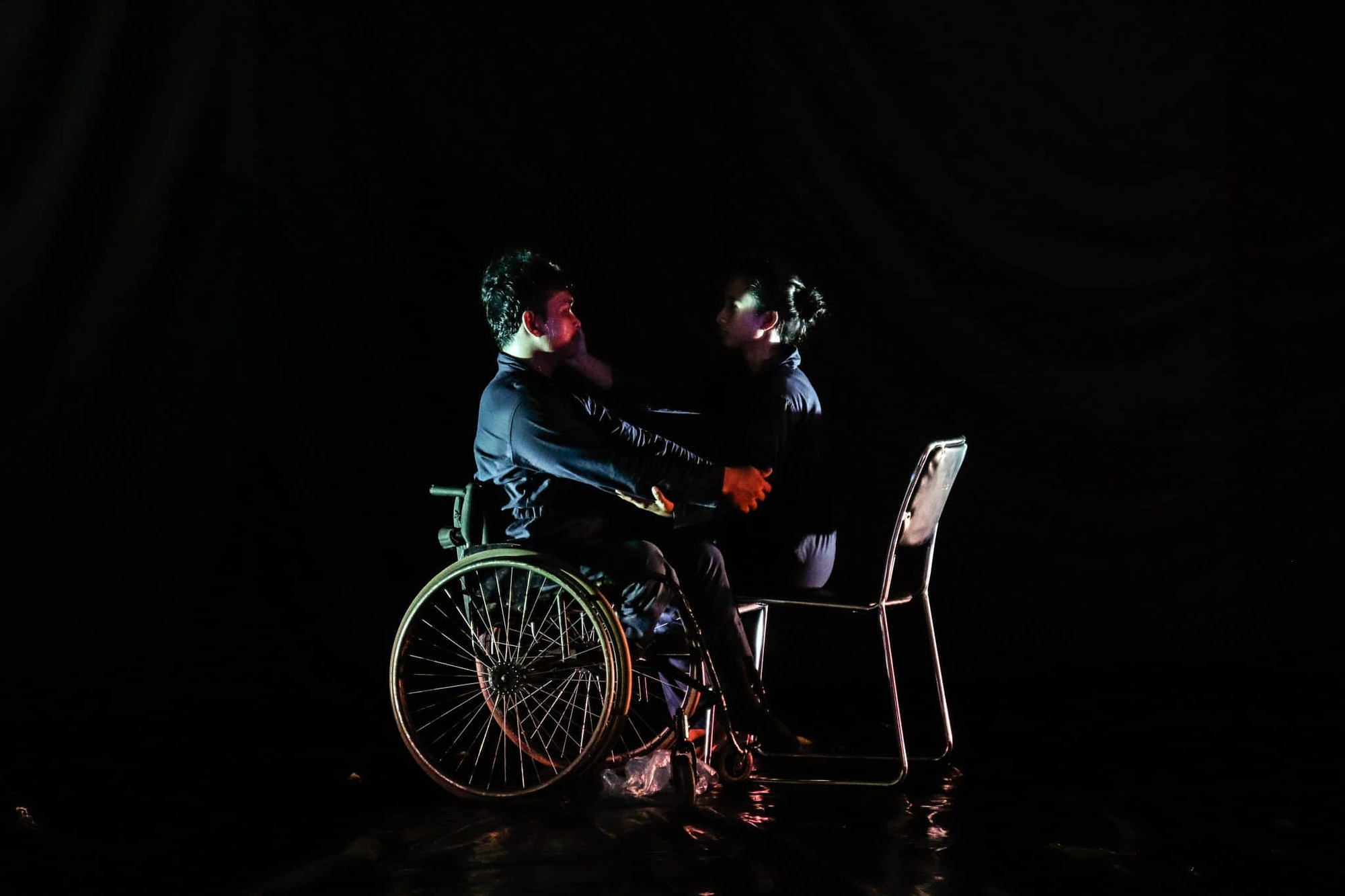 We Are Epic Director, Anthony Evans met James Cousins at the Edinburgh Festival in August 2017 and they began discussing the possibility of James working on an international collaboration with Epic Arts.

Ant and Onn Sokny, Co-Directors of Epic Arts, were excited to push the Epic Encounters Company to a new level of professionalism and James was excited to work with dancers with different bodies and abilities and to explore their diverse style of movement.

A successful proposal was made to the Arts Council and British Council to fund James to visit Kampot to create a new original piece that would be his first piece working with an inclusive company.

“Dance pieces are always shaped by the bodies of the dancers, I was eager to see how the different bodies could create something new.”

James touched down in Cambodia in August 2018, for a month-long production with 7 Dancers form Epic Encounters the collaboration culminated in the new piece, ‘In Softer Skin’ which is now on the Epic Encounters repertoire and available for booking for international festivals, and shows.

Buffalo Boy places Epic Arts and We are Epic at the top of their game as a world-class artistic collaboration.  It is inspired by the life of Thouen and reveals the hero’s journey of a young man as he leaves home and struggles to be seen and heard for who he is.

Cambodia’s first and only professional dancer with cerebral palsy, Dance has helped Thouen challenge his idea of what he can achieve. After a life of being ignored and being told not to speak, Thouen found himself drawn to dance as a way to express himself on Epic Arts Inclusive Arts Course in 2015.

Thouen is excited about sharing his story, Buffalo Boy, with his country and the world.

Thouen got his break in late 2017 when he was about to graduate from Epic Arts’ Inclusive Arts Course after studying arts for two years. Thoeun told Epic Arts staff “Please don’t send me home, no-one understands me there.” when asked what he wanted to do after he graduated the course he said, “I want to dance!” Thouen has cerebral palsy which, like most disabilities, is not understood in Cambodia. He has had significant trouble with verbal communication since he was a child, being told by his family “don’t try to talk to us, we can’t understand you” – Epic Arts

The Buffalo Boy project started with Thouen and his determination to dance.
After a life of being ignored and being told not to speak by his family & community, Thouen had found himself drawn to dance as a way to express himself and tell his story.

In April 2017 Thouen graduated from Epic Arts’ Inclusive Arts Course, after spending two years on the course he didn’t want to go back to life in his rural village, he wanted to dance. He wanted to make a performance piece about his stories, and continue developing his artistic skills.

The Co-Directors and Managers at Epic Arts were moved by Thouen’s determination and his progress over the two year course from a shy young man who wouldn’t make eye contact with Teachers to a man now going against the grain and taking his life into his own hands.

“We were there to hear Thouen, it was of the utmost importance during our conversations that we heard him, not our own preconceived ideas or misinterpretation. This may have made the process slower and led us to repeating questions but this is his story and we wanted him to tell it.” – – Hayley Holden, Projects Manager, Epic Arts

There are clear ways to revel in the success and impact that Epic Arts has on its students and the community. If you cannot visit Kampot now, let a few of these videos grab your attention. Some of them are direct social messages concerning health and sexuality. Others are just the delightful moments of students learning and expressing themselves. They are heartening and exhilarating.  Their YouTube channel offers plenty more. Warning, you will become addicted and hopefully inspired.

Van Chhovorn – The Enduring Man Etching his Life into Art