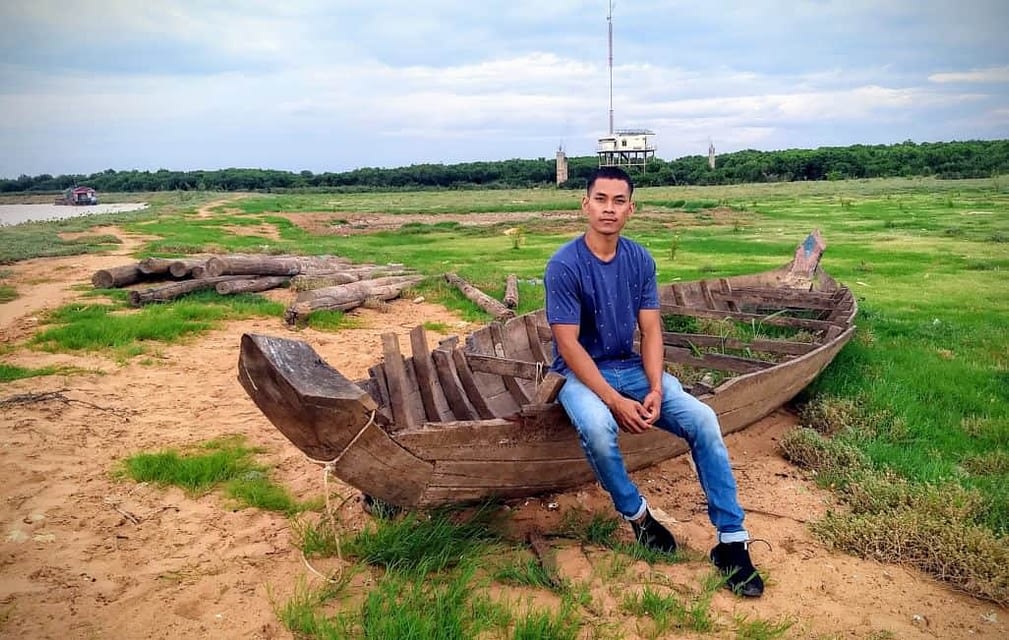 Channy Chhoeun looks like he stepped out of a Hollywood movie set. In many ways, he represents the Cambodian version of Adonis, the Greek god of beauty and desire. He is poised and paints elegant images of birds and nature. Thousands and thousands of friends follow him on Facebook. He is adored and looked up to as a role model for inspiring young Khmers. And he looks beautiful with the beautiful people of the world.

But Channy Chhoeun is a very real man – with a very real past and the very real unknown of his own independence and future. This he shares with his colleagues across the land.

Channy was born in 1988 in Battambang, Cambodia, the second largest city of Cambodia. In 1998, Channy’s family relocated into the jungle to a plot of land that the government gave to poor families to clear and begin farming.

As a child, he drew pictures in the dirt. At school, he drew them on whatever surfaces he could find. His father hoped his artwork might provide money for the family so he was sent to Phare Ponleu Selpak to receive a free arts education. He graduated in 2013 and took a job at Phare in the art therapy program, helping drug addicts to rehabilitate themselves. For a while, he abandoned his art and worked in the Siem Reap market to earn a little money he could send home to his family. When he finally returned home to the family dwelling the environment had drastically changed and the jungle and nature were gone.

His heart was pricked and he returned to his painting, making him an Audubon-type painter, desperate to chronicle birds, flowers and nature with his Khmer style for Cambodia’s fleeting natural environment.  (John James Audubon (born Jean Rabin; April 26, 1785 – January 27, 1851) was an American naturalist and painter. He was notable for his extensive studies documenting all types of American birds and for his detailed illustrations that depicted the birds in their natural habitats.)

He is now in his early 30s and lives in Siem Reap, exhibiting his work around the city and in Phnom Phen.

Having a childhood surrounded by nature affected both his eyesight, art and inner being. His concern for the destruction of the environment is frequently alluded to in his paintings. His early paintings were often watercolors of familiar environments. His later painting is typically very detailed images of birds, frogs, and nature in shimmering colors in acrylic or oil, and often very large wall installations.

His countenance is gracious, considerate and attending to whomever he is with. Nothing seems unnatural or put-on about his persona. Confident with his audience, his Facebook page frequently posts live-viewings of his painting sessions. He films small sessions of his drawing, outlining and then painting an image so that his friends can see his process.

He speaks in poetry, although when I told him this he looked at me quizzically.  I say this not just because of how he uses English but of how his thinking heart wishes to speak. He speaks in a tender Khmer Haiku, listening carefully and responding in the quiet calm words of images.

His paintings speak for themselves. Currently, His current exhibition is at the Sofitel Phnom Penh entitled Out of Control.

Some of Channy  Chhoeun’s work from 2014 to the present can be seen below. 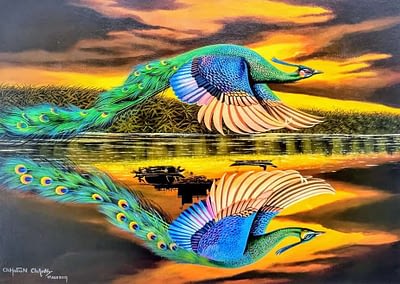