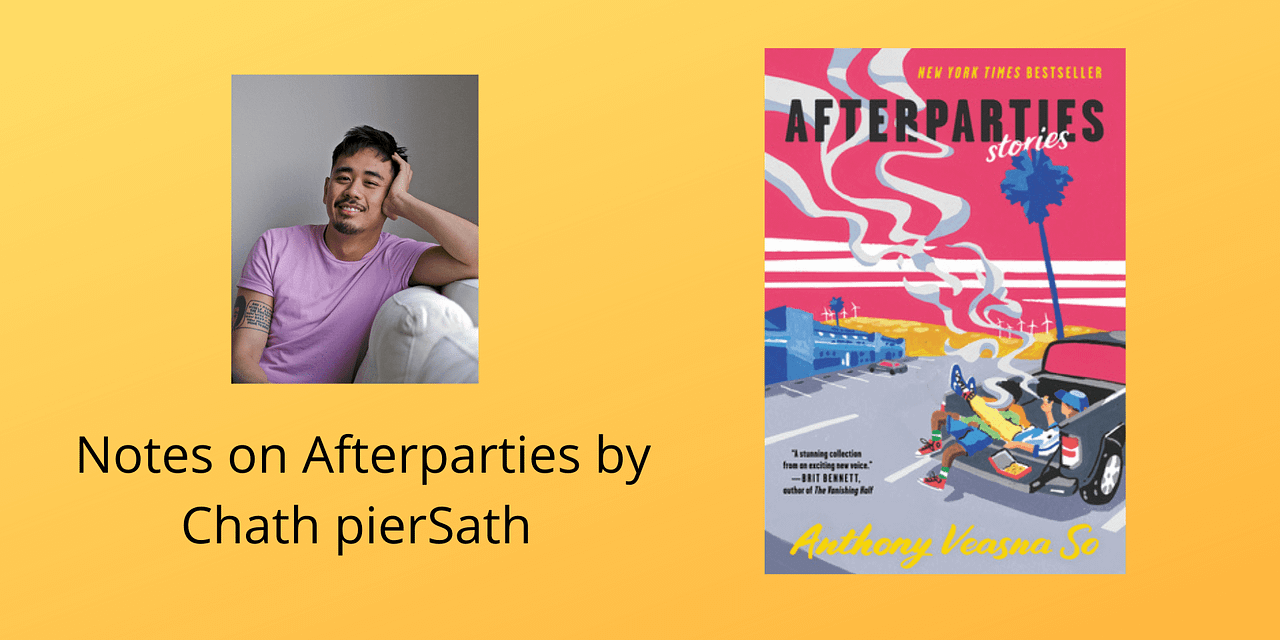 Editor’s comments:  When young writers craft stories that are witty while assisting readers to grasp cosmic ideas, it is cause for jubilation. When that writer is a young Khmer-American who suddenly dies, it is unnerving.  Afterparties has received glowing reviews from the New York Times, NPR, Kirkus Reviews, The Atlantic, and dozens of others – all announcing its electrifying storytelling. Seldom do we see the American immigration experience revealed with such humor and tenacity, while simultaneously leaving us with disturbing questions.

I was hoping Chath pierSath would offer his perspective on the book. He did! – Jinx Davis

Anthony Veasna So left us at age 28 with a debut book, Afterparties, to savor and reflect upon. He left the question, what happened? A what if? What could he have written, what secrets, what lives could he imagine, live and reveal within the next twenty or thirty years of his life and the lives of Cambodian refugees on American soil? He could return to the country of his parents and write about his experiences there, maybe like Vaddey Ratner’s Music of the Ghosts, where she returned in search of her father, a musician of the old regime, the old Sihanouk era. Maybe like Monica Sok, a young poet trying to come to grips with the immensity of human suffering her parents experienced that still linger in her mind, while existing as an American with little or no contextual experiences that her parents care to reveal or pass down to her. It’s all up to the young now to tell their stories, how they got to where they are, what future lies ahead, what hopes and dreams to mold and dwell on, what relationships to build, what obstacles and challenges they face as they learn and grow from the old and the new.

This is exactly what Anthony did in Afterparties, a book everyone should read—-everyone with a little interest in the Cambodian experience beyond the genocide and Khmer Rouge facade, survival story and victim narration. This book is about resilience, made in America by Cambodians, starting with the donut king spreading the opportunities to those who wish to work hard and get up very early to bake donuts for the American sweet tooth. It’s a story about family and intergenerational trauma with a twist of humor and reality check. The coming out party of a gay son, whose physical and intimate exploits are on the move, full of lust and sex. A youthful appetite for physical corroboration, melting two or four into an harmonious pleasure, with little or no strings attached. It’s a life he won’t ever reveal to his parents, the way most gay stories are told, often the act of being gay, is kept hidden and secretive from the traditional judgment or sentence of parents, like as if being gay is a kind of crime.

Afterparties take place in Stockton, California, a city I am familiar with since I, too, have lived there for one summer. It was very depressing. It was hot and dry. The humidity was like Cambodia in the months of April and May. I remembered these row homes full of Cambodians, as if I was still living in the refugee camps in Thailand. They were low-income housing, but the way Cambodians had congregated together, I felt like I was still somewhere in the past – as if Cambodians here had carved out their very own country within the United States of America. Strangers in a strange land and country, going about all their familiar things, trying to find work, make money and survive, give their children a good education so they won’t have to suffer like they did in the past.

In the book, Anthony tells us a bit about his family and the donut niche that Cambodians had gotten into or carved out within the economic boom and bust of the American free enterprise and capitalistic market. Other ethnic groups took the convenience stores or the gas station, maybe the food industry, like Thai food and Chinese food, take out and buffet, Japanese and Korean, popping up restaurants everywhere throughout the eat all American food palettes.

My own sister even owned and ran the Dunkin’s Donut chain in Louisville, Colorado. She had to give it up because it got too difficult to raise three children and manage the shop full time. She opted out for factory work, where she assembles pieces to something whole, with a consistent workshift, time and hours to deposit her check to pay rent, utilities and food, and maybe a bit extra to send money back to siblings left behind in Cambodia.

My sister was nine and I was seven when the Khmer Rouge arrived. We were separated into separate children’s labor camps, where we were given only a ladle of rice porridge to drink in one gulf for an entire day of work, and community and propaganda meetings late into the night.

I came to the US with my oldest brother, his wife and two other adopted boys my brother brought with him across the Cambodian-Thai border. My sister came to the US first with my aunts and their families. If I was to write a book about my Cambodian experiences, it would be different from what Anthony have told in Afterparties, though we are both gay, with similar experiences as a gay man, cruising and having sex wherever we could find it, celebrating our American freedom and liberty and the pursuit of happiness, looking for love in the melody of chains and shackles of the past, who we came to be here, of all places, Stockton, Lowell, and every Long Beach.

Anthony is superb in the way he uses English, garnished with humor to talk about serious subject matters like being gay, meeting family expectations and obligations, trying to be Khmer and American at the same time, balancing between the old and the new, thinking smart and out of the box, reflecting on traditions and religion, where same sex is scrutinized, but existing within the Pali holy wall of temples wherever there’s a Khmer community. He touches on most things, but not everything, that he left no room for other writers to come along and write a different story.

It’s sad that he died so young and left only his debut book, Afterparties, perhaps for young readers his age, or younger to pick up where he left off, and start painting and writing into pictures part of a very diverse human experience — that in the melting pot American soup, those who have been traditionally left out of the human story, can start narrating their own to fill the missing pieces to a puzzle.

Afterparties, published in 2021, is available in bookstores and on Amazon. 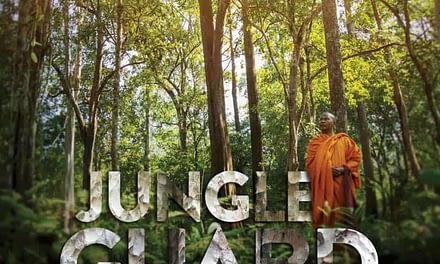 Jungle Guard – a Monk & a Forest in Danger