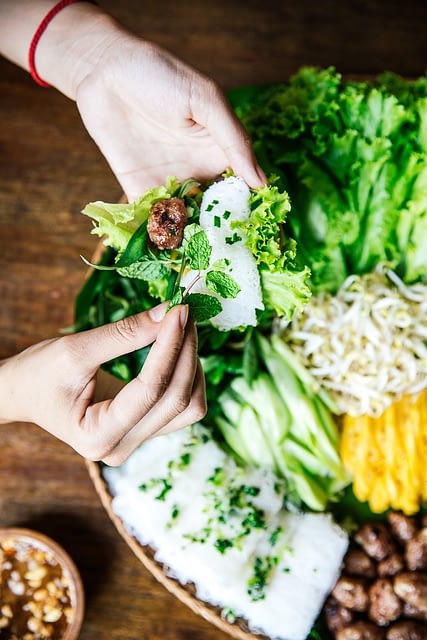 Chef Nak, whose real name is Rotanak Ros, has become an essential ambassador of culture from Cambodia.  Nak is a self-taught chef and entrepreneur who energetically is resurrecting Khmer food and introducing its glory to the rest of the world.

“Nhum: Recipes From a Cambodian Kitchen,” is a collaboration with Phnom Penh-based photographer Nataly Lee.  Nak explores recipes from her childhood and her travels throughout Cambodia. Her documentation of the ingredients and their health benefits bring to life the voices of the ancients before the Khmer Rouge destroyed all semblance of the joy – or possibility of cooking.

Chef Nak shares her ardor for Cambodian cuisine in books, YouTube, online classes, gatherings in her traditional wooden house, and at select venues such as the stately Rosewood Hotel in Phnom Pehn.

Magical Cambodia’s contributing author, Sokunthea Oum offers her take on Chef Nak’s work and what it means to a Khmer living abroad. 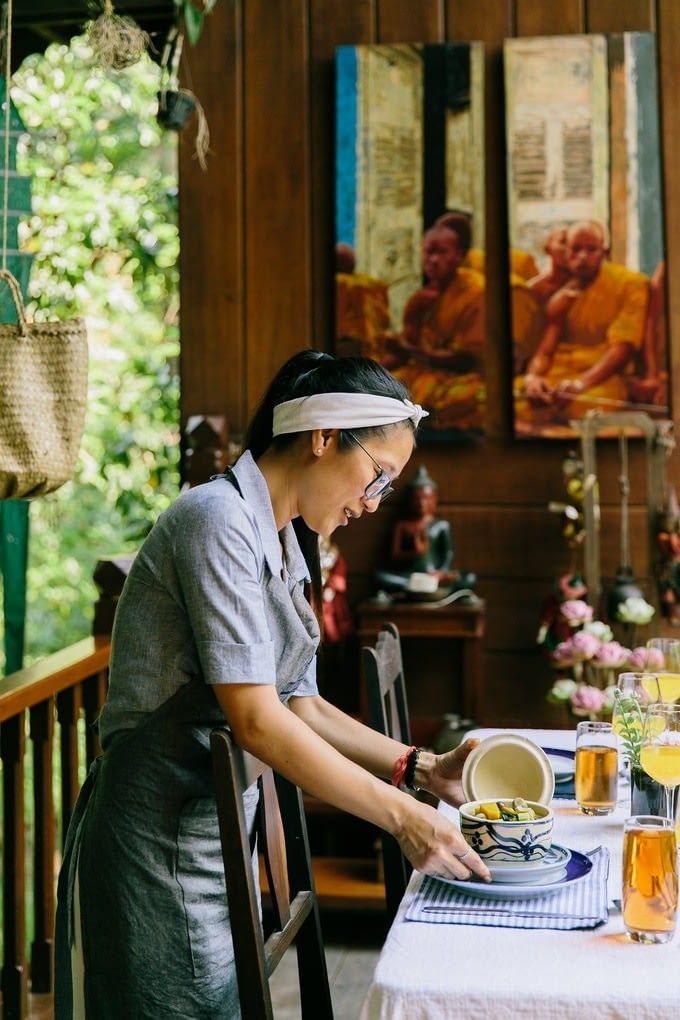 Cooking is a fine balance involving creativity by experimenting with available ingredients and lovingly guided by time tested ancestral hands that nurture us from the time we took our first breath.  The stories of authors Nak and Nat inspires me to share my insight on NHUM, a cookbook on Khmer cuisine.  Their journeys and wholesome message that food is more than just sustenance caught my attention.

Nak’s understanding of her health needs after a medical incident is a discovery we all should take note of.  By stepping away from the stressful demand of life in the capital and entering the sanctuary of the countryside, Nak nourishes the needs of her debilitated body that had been screaming for her attention.  Being away from the bustling city, she was able to spend time doing what she loves, leading her to recognize the healing power of Khmer food.

Chef Nak’s curiosity for flavor at an early age by peeking into others’ kitchens and inviting herself to neighbors’ huts in order to taste their dishes are indications of her desire to explore.  Such a trait is what makes a phenomenal cook she is.  Her reminiscing of tender experience of sharing ingredients and meals with neighbors is rooted in Khmer culture.  The act of sharing food is the foundation of existence which connects us beyond the boundary of ethnicity or means.

Many Khmer in a foreign land can relate to co-author Nat’s journey with her family from war-torn Cambodia into Thailand, resettlement, and eventual thriving by re-connecting to root of Khmer food for success in the restaurant business.  Similarly to Nak’s life, it took a major illness for Nat to relook at her life.  In learning more about her condition, Nat saw the medicinal aspects of herbs and roots used in Khmer cooking as vital ingredients to help heal her body and soul.

Both of these ladies’ journeys in discovering their roots and uncovering the nutritional and healing factors of Khmer food were supported by the wisdom of their moms and aunts.  As Nak quoted, “These dishes are our legacy- a legacy that was nearly lost and is now saved for future generations.”  NHUM is certainly their own voice, but it is also an ode to older Khmer women whose voices we otherwise wouldn’t have heard.

Spread out all over the globe, brought about by the horrid Khmer Rouge, new generations of Khmer are looking to reconnect more deeply with our culture by making efforts recreate the taste that nourished us from our early years.  We are asking parents, older friends, and family members for recipes, searching for how-to videos and seeking the limited number of cookbooks out there.  Not until the recent decade were recipes written down. Khmer family recipes are not documented, because cooking is passed on orally from generation to generation through being shown in the kitchen at a young age.

Often the instruction goes something like this… a handful of that, a pinch of this, several leaves of that, a finger length of this, etc.  As such precise measurements and directional guidance for the recipes are beyond reach.  Most often, for the older generation, it’s the girls who were shown. With modern life, if the girls are too busy or have no interest, the lineage of time tested family recipes eventually disappear.

As the oldest sister in a family of nine, cooking was introduced to me around seven years old by Momma.  She needed help in watching over the fire to prevent overboil and with prepping because of the many younger siblings. How could a little girl forget when asked to help hold down the live chicken for her to do her part with its neck, and to help pluck its feathers it after she dipped it into a pot of boiling water!

Many memorable experiences are held by the visceral sense.  To this day, I can still remember the grueling, yet rewarding, process of making “nhum banchok” during the Khmer Rouge.  The making of the noodle alone took an entire village two days- starting with de-husking rice from its stalks, pounding the rice to break open the husk, then separating the grains from the hulls by tossing it in the wind using a traditional basket, and then soaking the rice overnight.  The next morning, hours were spent grinding the softened rice with a hand churn stone grinder.  The mixture was poured into fine cloth to extract water.  The ball of soft flour was then set into boiling water and cooked 1/4 way, based on the look on the ball when raised out of the water.  The semi-cooked whole ball of flour would then pounded and kneaded in a large wooden mortar to mix the cooked/uncooked parts thoroughly.  The next step was to press the flour mixture into boiling water through a tin canister, with holes punctured made with a large nail, to create the noodle strands.  The efforts to prepare the “krueng” (which can found on page 48) and vegetables to assemble a bowl of “nhum banchok” was laborious as well.  I am grateful that rice noodles are readily available at Asian groceries and that electric blenders are a huge help in cutting time and mess.

I notice that “nhum banchok” is not listed in the book, but having the foundation of being the kitchen early on, I know that the soup is based on “Somlor Brohoeu.”  (At least this what my mother taught me). A whole fish is generally boiled, and the meat is picked from bone,  pounded with krueng, and then returned to the broth to create a thickening sauce to serve with the noodle. Additions would include thinly sliced vegetables such as long bean, banana blossom, cabbage, etc, and various kinds of herbs.

In looking at the recipe for “Somlor Broheou” in NHUM, I noticed that the aromatic finger root- “Khcheay” is not listed.  The “broheou”- loosely translated as mildly hot, comes from the khcheay, otherwise, it is not a “broheou” according to Momma.  As we all know and noted by Chef Nak, there are variations from region to region and from family to family.  As such, it’s up to each one of us to document how each of our family prepares that favorite dish.

NHUM’s curated list of recipes are foundations for us to go about and experiment with ingredients available in our neighborhood.  Yes, one can look up most recipes on-line, but there is something about spending time away from the digital world.  Leafing through an actual book and taking a moment to feast my eyes on a beautifully laid out NHUM takes me down a memory lane of being in the kitchen with Momma and reminisce how she would cook such and such.

If I hear from Chef Nak, I promise to share what I learn.  Until then, please join me in trying out some of her memory invoking and delectable recipes here.  Pumpkin with coconut and tapioca, perhaps?

I’m a Khmer American offering a personalized Hatha Yoga and iRest® Meditation in the East Bay of San Francisco. I have worked with a wide range of age groups from elementary, high school, to elderly folks traumatized by war. I also take my yoga journey to Siem Reap, Cambodia, on an annual basis and am currently working to provide more yoga and meditation in Khmer language. I write poetry to help myself understand and express my thoughts. I’m a mother of two teenagers, who are taking flight from the nest. Like any parent, I’m in the process of re-discovering myself and make a commitment to what is important in my heart. One commitment is to continue to be an advocate for women’s rights, especially girl’s education in Cambodia. I have been engaged with several NGOs to see it through, such as Caring for Cambodia, Tabitha, and Opportunities of Development thru Art. Website: https://sofiteme.wixsite.com/oumyoga

Bangsokol – A Requiem for Cambodia