ON EARTH BENEATH SKY EXPLORES THE UNCERTAINTY OF LIFE

Editor’s note: Chath pierSath is a contributing writer to Magical Cambodia and I consider him a friend. He has granted me the privilege of reading many of his published works as well as a novel still in process. It is from this engagement that I offer a few thoughts and share 3 of the 68 pieces to be found in his new book, On Earth Beneath Sky – Poetry /// Sketches. Chath’s work deserves inclusion in the canons of Cambodia’s new Khmer writers. The book and its reviews are available at Loom Press. – Jinx Davis

Chath pierSath lives between and betwixt worlds both inside and out. It is a balancing act of memories, emotions, and cultures – and he is courageous enough to fall off the tightrope.

Reality surpasses the imagination, spoke Soth Polin the Khmer writer and intellectual who admitted his difficulty in writing after the personal and national atrocities of the Khmer Rouge genocide. Yet the new literature emerging from Khmer writers is resilient in its explorations of the past and the present.

Chath pierSath is one such writer and his new book On Earth Beneath Sky abounds with a vibration suitable for both insiders and outsiders to reimagine Cambodia, America, sexuality, family, and the chronic tensions between the past, present, and future. Above all, his writing is refreshingly fearless and honest. Having three published books behind him, On Earth Beneath Sky is a wide selection of 68 poems and prose sketches that traverse the emotional terrains of the uncertainty of life.

Chath is a conjurer and astute palm reader of Cambodia, the United States, and his own selfhood in his poems and prose sketches. He writes like he paints, swirling images in intensity and sadness; throwing darts at ideas or assumptions; pleading and longing, yet always finding a path towards reconciliation, soothing, and a celebration of life. He moves past expected trauma healing narratives and instead leads his readers to rummage around their own minds to discover misconceptions, views, and what they may have taken for granted.

Take an ordinary bed for example. In Ode to an American Bed he addresses the inanimate object in an intimate confessional conversation and ends with a quiet plea: America, bed me in your liberty flame.

Ode to an American Bed

Every night, by twelve, you and me, to silent dreams sweeping the floor, painting the stars, falling to empty wishes and yearnings. Kissing lips and body to warm my flesh. You wait for lights out to take my weight, cushion my back, and absorb my pain and sorrow, send me to warm dreams or horrid nightmares or dreams in the Milky Way. I enter to be cuddled under the goose-feathered duvet.

In December’s snow, our room chilled to ice but insulated what it contained, like an igloo—my body warmed enough to toast bread and boil water for tea, my thoughts far, like an open book about distant countries, Sahara dunes, treasure caves, and island castles inhabited by fairies, the smallest people made large by the paradise they tend. I, your king, must think into the future, must close my eyes to visions of a life without war, without borders or countries to conquer and defend against. I must plant flowers, make all people feel beautiful and happy, one planet, one family.

What sea-traveler’s adventures have you kept from me? You cannot live without me nor I without you, my security and companion. What rise and fall, tender grief sent eastward for final cremation? What tears could I have shed? What tosses and turns? How restless is the ravishing fire, exquisite flame tongue of dragon spit, muted by the gold color that sparks into flower.

Grant me eternal peace. Let me sleep past dawn while the sun heats my body. Knock down my kingdom. Let my people eat well. Let them drink the clearest, cleanest water. Let them sing and dance, forever free from harm. Grant them the riches of pearls and gemstones from the caves of life and give them knowledge to manage their desire, greed, hunger, and thirst, and give them this bed as you have given me.

America, bed me in your liberty flame.

Belonging is always in the question and he understands that he is always a stranger in a strange land, whether it be Cambodia or America. This awareness does not stop him from confronting entrenched mindsets or destructive cultural or political actions. Instead, he addresses issues straight on. Nor is it a wonder that he is an expounder of Walt Whitman with the free verse he uses to address the questions that play upon his mind. When challenged with why he does not write in the tightly controlled traditional Khmer poetry style he answers in free verse:

From a Khmer Poet to Another

Don’t forget rhymes and proper stanzas,
The placement of grammatically correct words and phrases.
Be well-versed and an expert in this first before you start to write.

Khmer is ancient, full of beautiful flowers and trees that rulers cut down,
Ways to rhyme and play with words, ways to tell and describe,
The language Angkorian with boundless feats,
Romance and longing it can express,
Where flowers in high degree full of scent and virgin breasts like Apsaras
Bounced to the wall, moon, and stars, rapture a kingdom full of majesties.

You can write, but you must write the way I tell you. It is the correct way.
I have been a poet for a long time. I know everything about poetry.
No one writes like me. I am the only voice
In the history of Khmer literature.
Have you read anyone like me?

No. I can’t read and write Khmer. Should I be happy or sad?
The Khmer I can read and write isn’t your kind of poem.
In fact, you don’t consider it poetry. It doesn’t rhyme
Or follow eight-or-four-line restrictions.
I am not a literary expert, not in English or Khmer.
I don’t belong to your social class. I am not an educated person,
But I’m a learner.
I don’t have a Ph.D. in history or literature.
I just have words my mother taught me.
Hiss like a snake, she told me. Fly and chirp like a bird, she said.
Freedom in the sky, she pointed. Love in my arms.
Speak as if you’re whispering to the wind,
As if the ocean had swallowed you inside.
Dream where the dragonflies dance, where fireflies laugh and cry.

Hear your mother’s rice fields, in sorrow and in joy,
Swing and sway, dusk to dawn. Drink the milk of her forgiveness,
Lick from her dewdrops the life and wisdom on the morning grass.
Swim in my river, she said. Laugh on your back, float.
From me, a life no one can own or barter,
Proud as the beauty of this inheritable earth,
Where my tongue sharp and blissful, free and bold, boundless,
Can hiss from the heart of a snake.

In many of the pieces in this collection, the words splinter inside me.  It is difficult to write about death without the residue of sentimentality. Emotion without an excess of its object is mastered throughout Chath pierSath’s writing, whether he is addressing the pain of the Khmer Rouge or the death of a friend, he refuses to allow sentimentality to cheat by manipulating his readers. The author John Gardner identified sentimentality among “faults of soul” in the writer.  Here there are no faults in Chath’s soul. Consider this rendering of being with a dying friend:

An Elephant, He Went an Ant

An elephant, he went an ant—
Tiny puff scurrying into the grass and weeds of his garden.
He wasn’t too old, but he wasn’t young enough to resist dying.
Lymphoma spread, an organ at a time. The kidneys went, then lungs,
The heart the last stand, pumping vital blood full of sex and fun.

Always on the road, between homes, each season a continent,
Across the Atlantic or the Pacific, in bars and restaurants,
He drank like a seal swallowing the sea, looking for company,
Talking sex and wet dreams since puberty,
Before the time of AIDS, even past its first wave of death.

Now at home December whispers chilled gossip at his door.
A short walk between stone walls on cobblestoned paths.
Golden sun lit the tiled brick roof of his neighbors.
Window mountain view the size of a large Van Gogh.
His time is recorded on the rocks and stones in this village.

With an inheritance, he modernized his summer home
Running water, books, and lights. Schumann on a piano near him.
I woke to his slightest groan of pain—in the dim light,
He lay on an adjustable bed, stationery in discomfort,
Thin face, jaws and nose, like dying Jesus on the cross

Waiting to be received by his holy father,
Closing his eyes when I came down.
His face shone from the ceiling light.
I had no words, no wisdom, just silence, my hands felt his face,
Touching loose hair while invitations rose from medieval walls.

Reincarnate across time and space.
Free yourself from earthly flesh.
Travel across the stars to a more
Lustrous friend out there than I can ever be.

Come inside the grass, said the ant.

The 68 poems and sketches in On Earth Beneath Sky include a wide range of subjects from Chath’s lifetime. Whether it is confronting the haunting memories of his early life under the Khmer Rouge; his escape to a Thai refugee camp; his arrival in the US where he learned to embrace words as powerful tools towards discovery; the labyrinth of his sexuality; the frequent returns to his homeland; his tributes to family; and his present life between two cultures – the book leaves readers with the entreaty that the world can be made better than it is. It is this entreaty, carved from carefully crafted emotions and images, that makes reading and re-reading his pieces a consummation worthy of deep appreciation.

It would do us all well if we were to contemplate upon On Earth Beneath Sky. 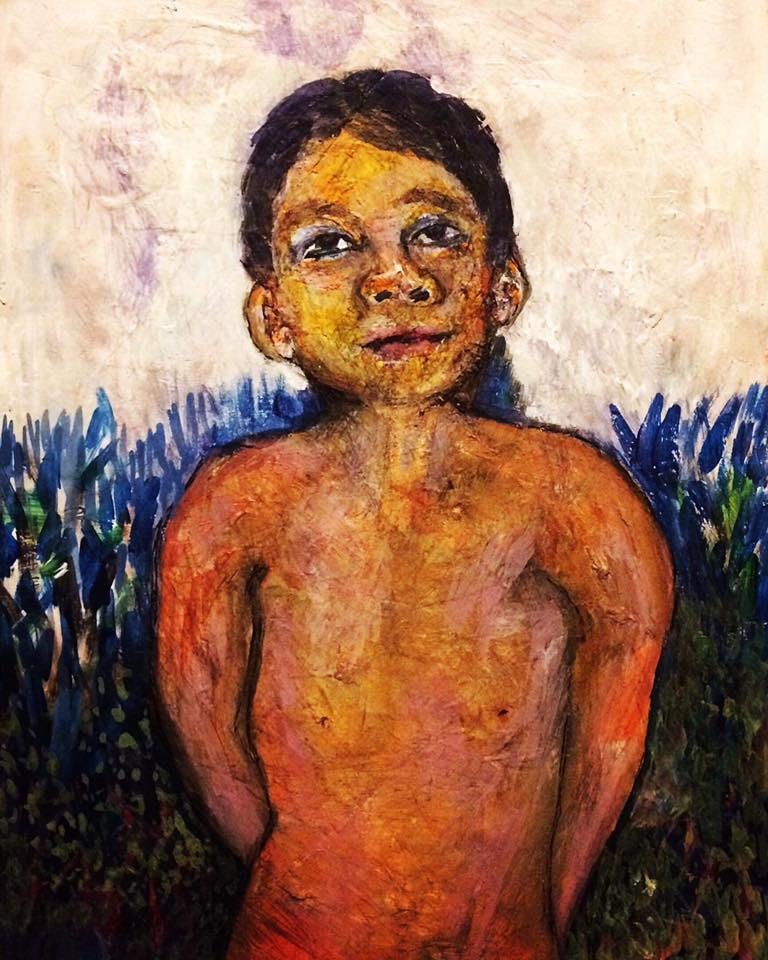