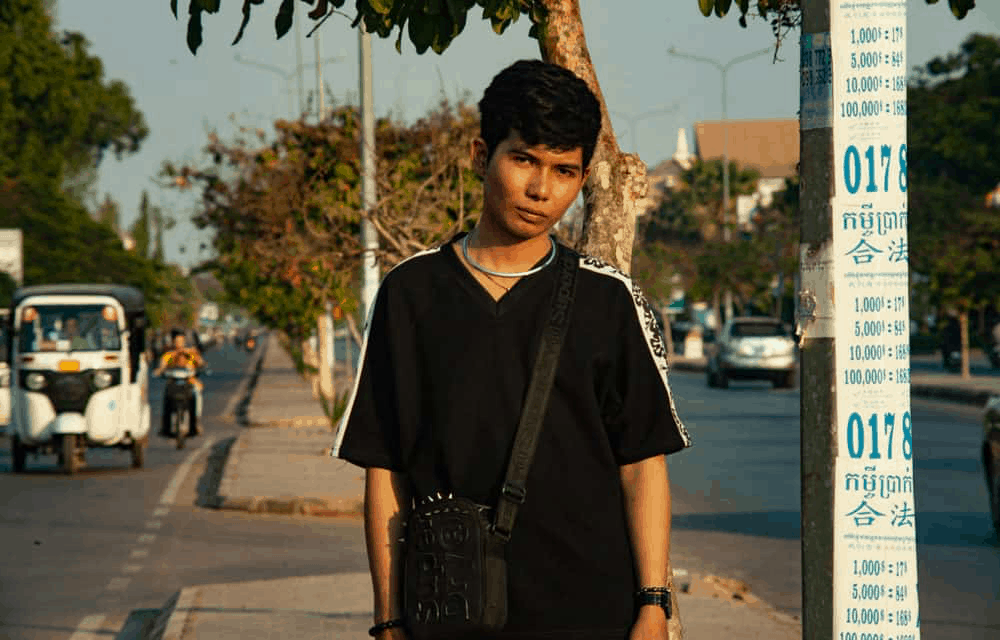 Nak Noy is the proud owner of probably the coolest (but also sensible) scooter on the market. He’s just stepped off it in boat-size trainers. “Chunky. Huge feet? Skinny legs.”

‘Eggs! Oh my god, eggs – you’ve got different foods on your shelf to what’s found in the countryside” Nak Noy declares as he waves a rustically bejeweled hand across my kitchen shelves. ‘”They used to cost about 500Khr (12c US) but now they cost double, easily”, he says sweeping his head emphatically.

We regard each other for a moment across the table. It’s hard to talk about anything without referring to you-know-what. “As long as we can eat, we’re okay. I’ve saved what I’ve earned, but my friends working in hospitality don’t have that luxury.” He delivers a pained shrug in silence.

I am sitting across the table from this clearly very young, but also widely touted starlet artist who has his own residency wall next to Banksy at Tribe Gallery in Kandal Village, the new-old town of Siem Reap, Cambodia. He regards me with his somewhat unusually fair brown eyes glint. I get a sense that he knows more than he says. He remains disarmingly deferential. As a proud new member of an online zine, I’m supposed to be versed in the local ‘scenes’. I confess I am, and always have been, a distant pretender to understanding the art world, but I’m learning. So far, so good.

Barely twenty, this young man has been a pro for three years. His curative sense of image is immediately apparent. An NYC beanie with six studs at the front (it’s 38 degrees), combined with the cotton mask and fashion band-aids on his jaw.

We wear no face masks and non-contact is observed unspoken. His way has an etiquette, a natural grace, beset with eyes that are fair brown and twinkle with… is that… mischief?
Energy, certainly.

He’s frank. Driven by the strength of his mother, he tells me, their family of six survived dark times together – hence the womb-like dream nature of his painting style, often featuring feminine center-points. “There’s four of us but there was an elder sibling, who I never knew, she died before she was one. So I never knew her and I’m not affected in the same way as my Dad was. It was hard for him to handle. My earliest memories really are of my Mum holding it together for everyone. That’s why the connections series was all woman.”

I pose to him the irony that despite the reflections made by the series on social distance created by technology, it is in these modern times that devices are holding us in touch the world over. “This”, he picks up his phone and waggles it dismissively, ” Today it’s bringing people together.”

“I went to many exhibitions, and I watched, I studied their way, their attitude. As professionals. Me, I can be open with friends but their way is open and – I’ve learned a lot. I have learned to listen to people when they pick apart my work or share their opinions. For me that’s the pinnacle of being an artist, to share the stories leading from the work, and there’s no getting away from the fact that critique matters.”

“I probably have a year for living in reserve.” He leans in and smiles, knowing that he can continue on this path and that a year in the career of Nak Noy is a long time.

We barely even talked about street art, skirmishing fleetingly upon it as he kindly drove me to collect my own bike from the mechanic. Don’t doubt for a moment, however, that a glimmer could not be felt from behind the visor.

Nak Noy is a Khmer artist represented by Tribe Cambodia Gallery in Siem Reap. Here is how Tribe’s founders, Terry Mcilkenny and Nat Di-Maggio describe him:

Nak Noy, although only 20 is a hugely talented self-taught artist. born and raised in Siem Reap. His obsessive eyes for details together with his intricate lines and patterns are created in fine pen and ink and taken from his young but vivid imagination. The development of this obsessive talent can be mapped at his homestead in Siem Reap where his fertile imagination was allowed to develop from a young age with his art covering every available wall His signature style is instantly recognizable with multiple layers of meaning and metaphor. The feminine form of nature, innocence, and hope are reoccurring themes in his work.

The Powerful Impact of Phare