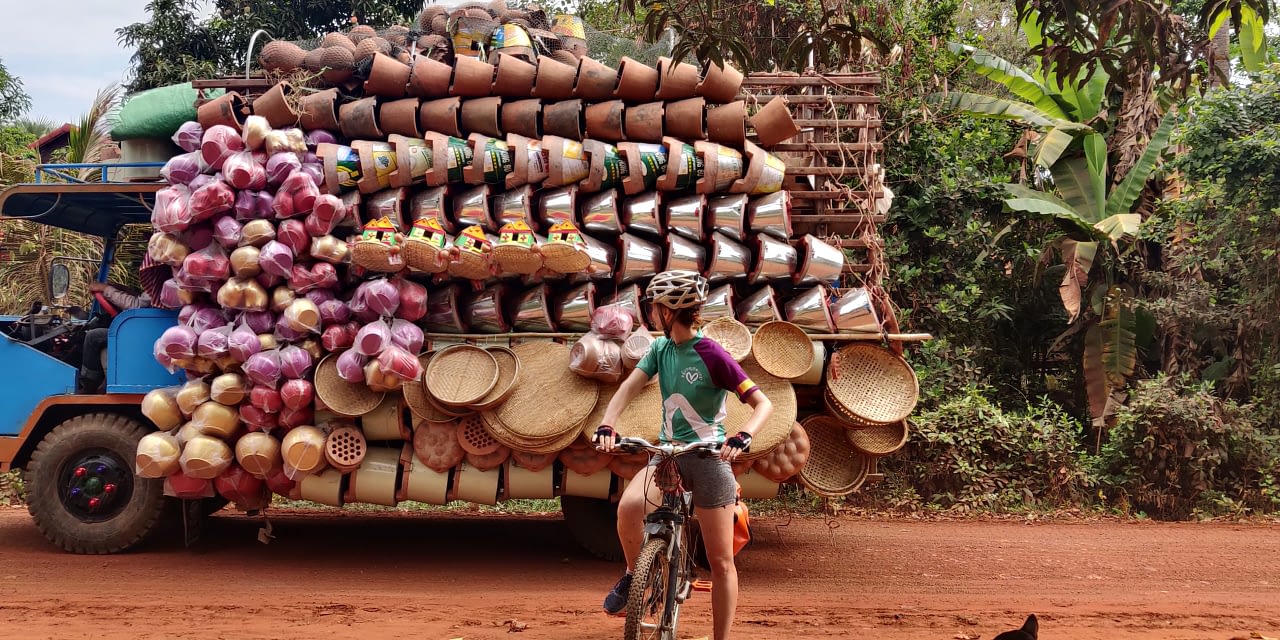 It was one of those days where you wake up at about 3 am and just think, bugger it, I’ll put the coffee on. I’ll sit down and listen to 24 vowel sounds that sound pretty much the same, and keep cycling them until my ear can pick out the difference. I do a good job of getting into it. My roommate soon rises with typical cheer. ‘Morning, Dickhead!’ (We live in a Southeast-Asian millennial young one’s world. If the English aren’t constantly moaning or picking fault then something is definitely wrong. This was already a good day). We fill our water bottles and grab our helmets.

Cambodia or Kansas? Water Buffalo graze amongst empty rice paddies on the outskirts of Siem Reap

Siem Reap’s southern ring road is pot-hole glory and stripes a coarse path along the rice-paddy landscape, dropping onto red clay dirt roads, heading directly south for a good 10km. There the roads mix with the deep, blue-green of a rain-washed water Buffalo; the verdancy of the fields refreshed by showers in the night; the gaudy glory of a pop-singer on a beer banner from the back end of a short building. Clouds rake high in the morning light split before turning off into the bush, several winding km of low branches and tight turns, before emerging onto an ancient dike. (Siem Reap was a food source for the largest pre-industrial settlement in history and this farmland has fed that since rice came over the hills from China about a thousand years prior. A sense of sleeping might rests underfoot.

We found ourselves at a clip, move deeper into these massive, ancient fields, ringed by moats and irrigation canals, which have gradually grown to several meters across as we move deeper into the field system.. The fields are walled with dikes of several meters and the top is rugged stone-hard dirt, presumably from perhaps a millennia of frequenting. Cool, cloudy the world rolls along, wide open. And then the invasion…

What crossed our paths that day not only ensured we stopped but that we stopped right within a perfect frame. Almost as if they knew you would be reading.

Up ahead, the most extraordinarily large skein of ducks are crossing, driven up the bank by what I presume to be wife, and husband brings up the rear, driving the birds from the irrigation ditch, up and over the dike, and down into the fields on the other side.Lula calls a greeting and tries to find out how to say duck. Dap!

The farmer suddenly pops up behind us wearing a huge grin and eyes filled with curiosity. Lu asks how many ducks. Four thousand, he beams, highly amused, and in no doubt as to the meaning of ‘wow’. Tran! A lot! says Lu. A lot! agrees the farmer, beaming with pride before descending into the field, the ducks forming vast legions as they filed along the furrows into the vast, flat distance. The whole scene was entirely coincidental and yet if played out in cinematic panorama.

Three hours, a bottle of coca-cola and some rather striking images of colorful trucks which sell all manner of homewares and frequent the villages, we race at a veritable pelt along the gravel roads of south-east Siem Reap, serenading the lauding masses with bursts of Eighties pop sensation The Shamen. As I hunch hungrily over a pastry and watch the clip back again, what’s striking is his bounding cheer, but also his awareness of keeping it simple for others to understand.Learning a new language in a faraway tongue is intimidating but with characters such as this farmer liable to pop up, it is also an unparalleled adventure. Don’t be put off if speaking it out is hard – you will get to that magical place!

I shan’t be pussy-footing around in the coming week – watch this space for some language hacks and resources! In the meantime, It’s never a bad idea to start with the Alphabet. I’ll be back with treats in two shakes of a Buffalo’s tail.

P.S. What is a group of ducks called?